A kiwi filling is swirled in a cream cheese base for a one of a kind pie experience.  If you’ve never had kiwi and cream pie, you don’t know what you’re missing. 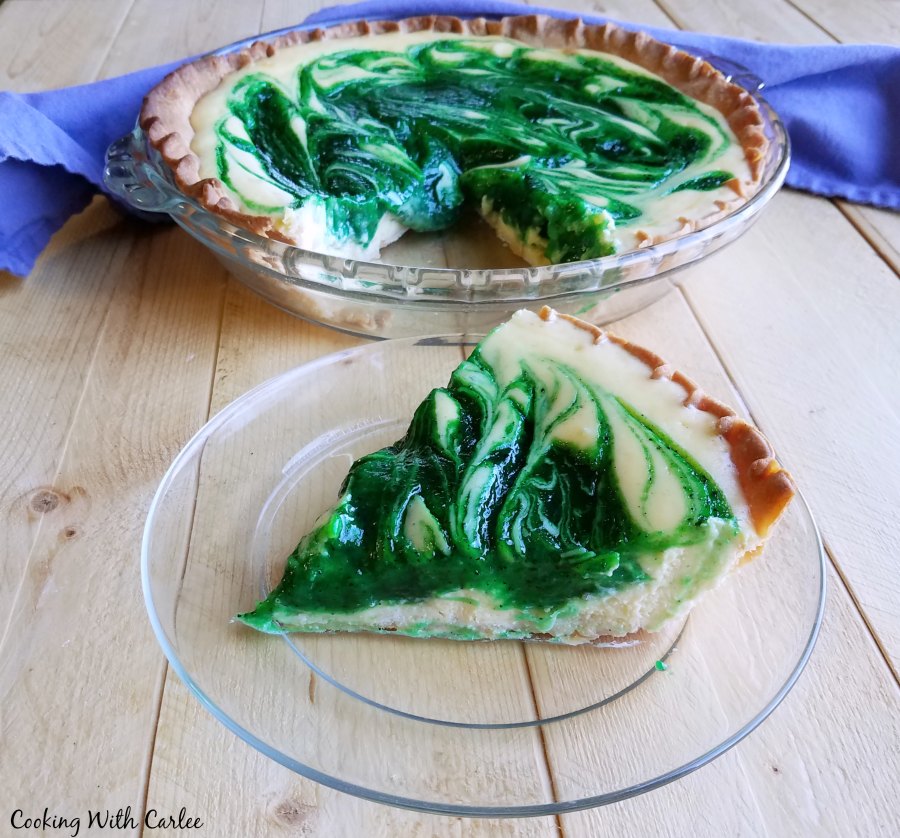 I have a sad story to tell you.  I am sitting next to an empty pie plate trying to decide what to tell you about this pie.  So far I have “it was good” and “I wish there was more.”  But, alas there is no more.  Darn! 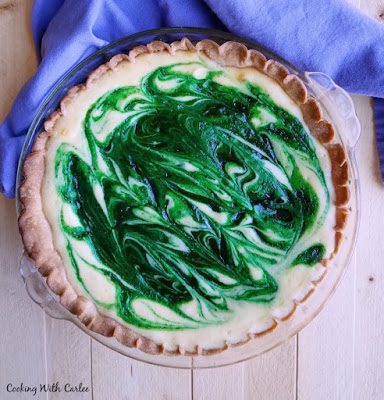 It all started because I had some kiwi that I wanted to use.  I searched for ideas online, but I didn’t want to make a smoothie or sorbet.  There were some tasty looking salsas, but that wasn’t what I had in mind either.  So, I set off to make something on my own.

What I ended up with was so tasty!  The kiwi added a light tart tropical flavor swirled into a cheesecake type base.  This would be really good in a graham cracker crust too, but I didn’t have any graham crackers on hand today.  So, pie crust it was! 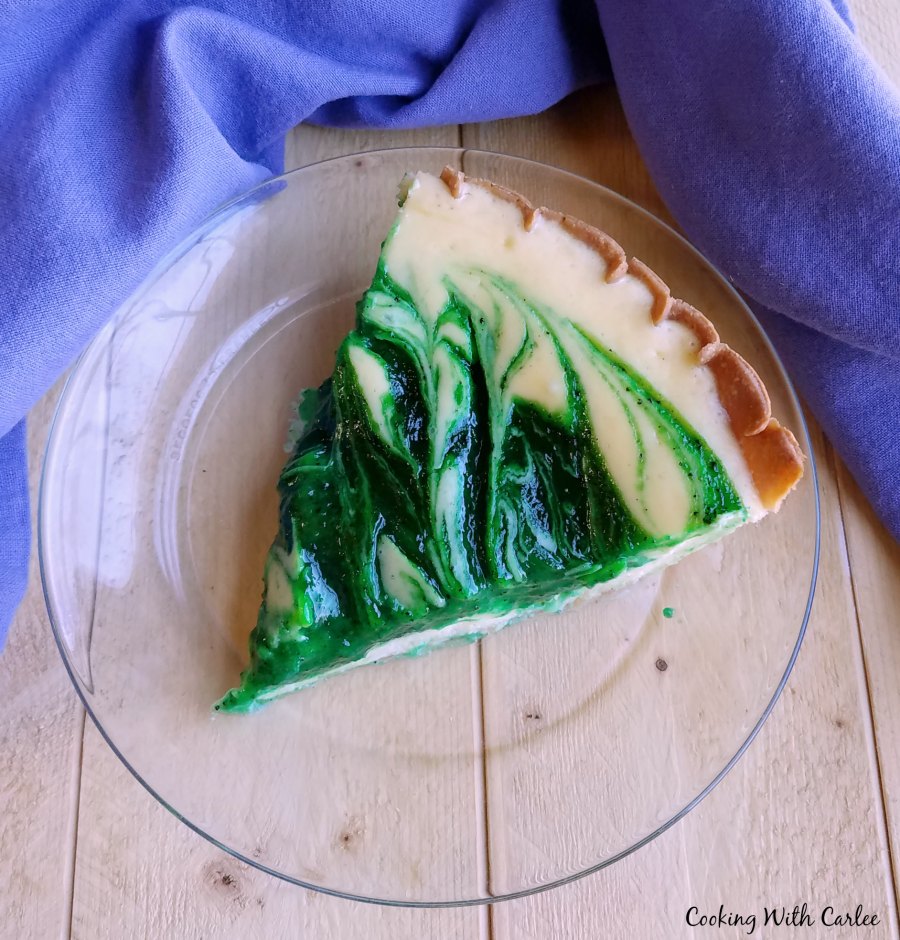 After just eating a half of a homemade pizza, Matt still got a second piece, which almost never happens with dessert.  He had to share one with Sam when he came by too.  He made the comment that I could make it again whenever I would like.

It always cracks me up when he says stuff like that.  But I took it as a compliment.  He had just gotten done telling me about how he really isn’t into pies, other than his mom’s apple pie, so I was happy to have one he would request again.

I don’t know why, but I just love that you can see the speckle of the seeds in the kiwi filling.  So fun!
Yield: 12 servingsAuthor: Cooking With Carlee

A kiwi filling is swirled in a cream cheese base for a one of a kind pie experience. If you’ve never had kiwi and cream pie, you don’t know what you’re missing.
prep time: 25 MINScook time: 1 hour and 7 MINStotal time: 1 hours and 32 mins

1. Preheat oven to 400 F. Place pie crust in pie pan. Prick the bottom with a fork,
then cover with parchment and pie weights or dried beans. Bake for 12 minutes,
then remove weights and bake for 5 more and set aside. Reduce heat to 350 F.
2. Peel and puree the kiwi. Mix kiwi and a half cup of sugar in a small saucepan.
Over medium-low heat, bring to a low boil. Simmer for about ten minutes or until
it starts to thicken. Add a slurry of the corn starch and a teaspoon of water. Allow
to simmer for a minute or two longer. Set aside and allow to cool.
3. In a mixer, whip cream cheese until smooth. Add the other half cup of sugar, egg,
vanilla and salt. Mix completely.
4. Pour cream cheese mixture into par-baked pie shell. Spread kiwi mixture over the
top. Using a knife, gently swirl the kiwi mixture into the cream cheese mixture.
Bake at 350 F for 45-50 minutes or until barely set.
5. Cool for an hour, then refrigerate for at least 2 hours before serving.
http://www.cookingwithcarlee.com/2015/03/kiwi-n-cream-pie.html
Copyright: Cooking With Carlee 2018
Created using The Recipes Generator 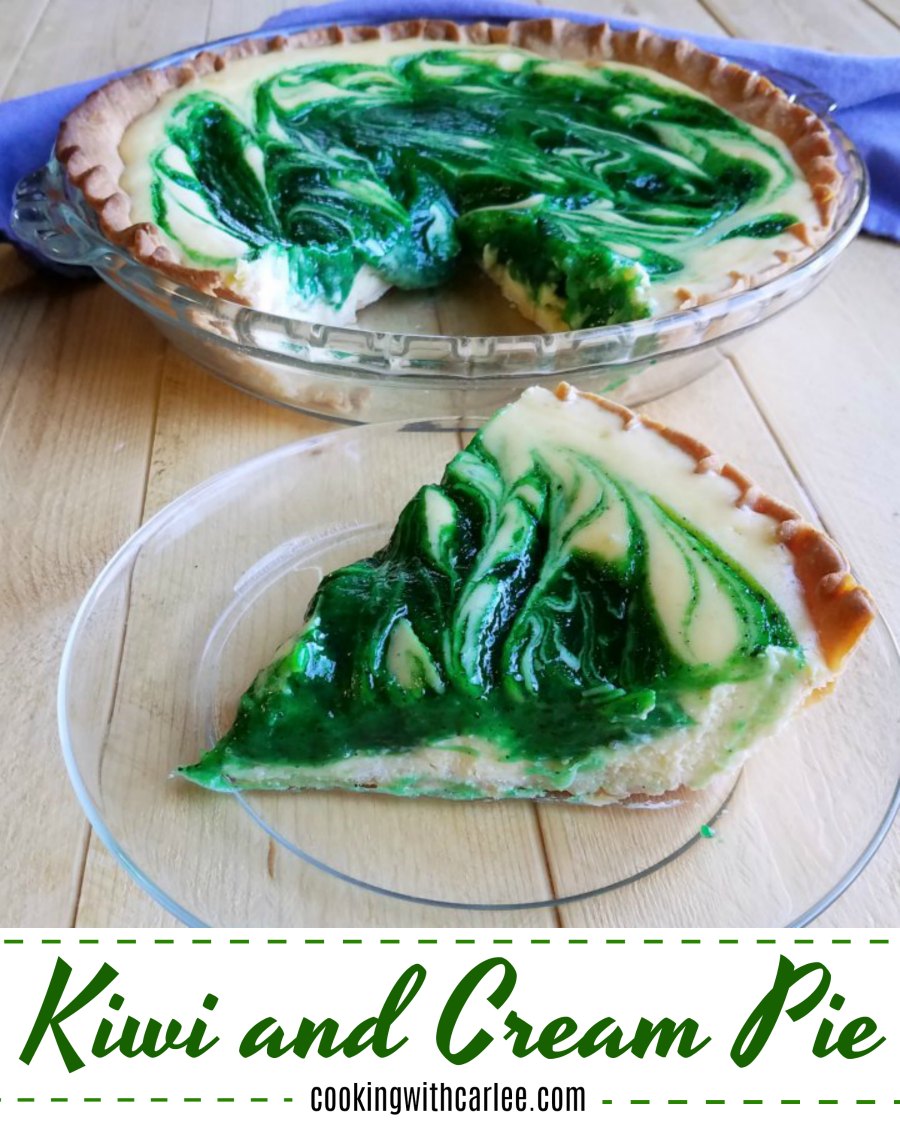 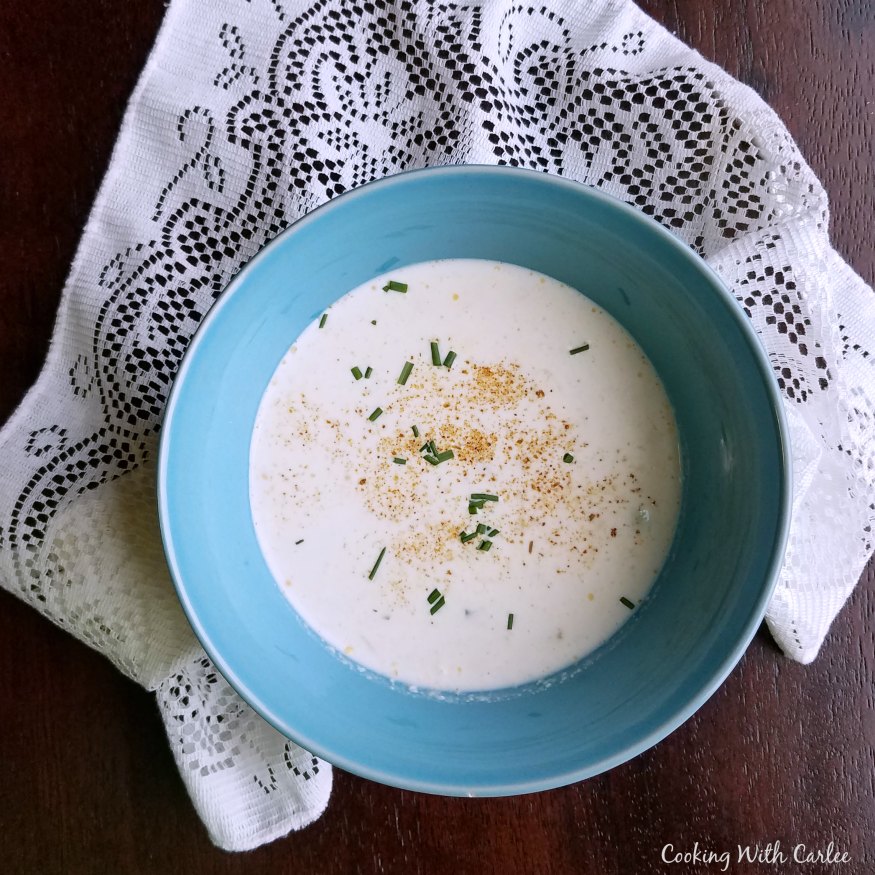 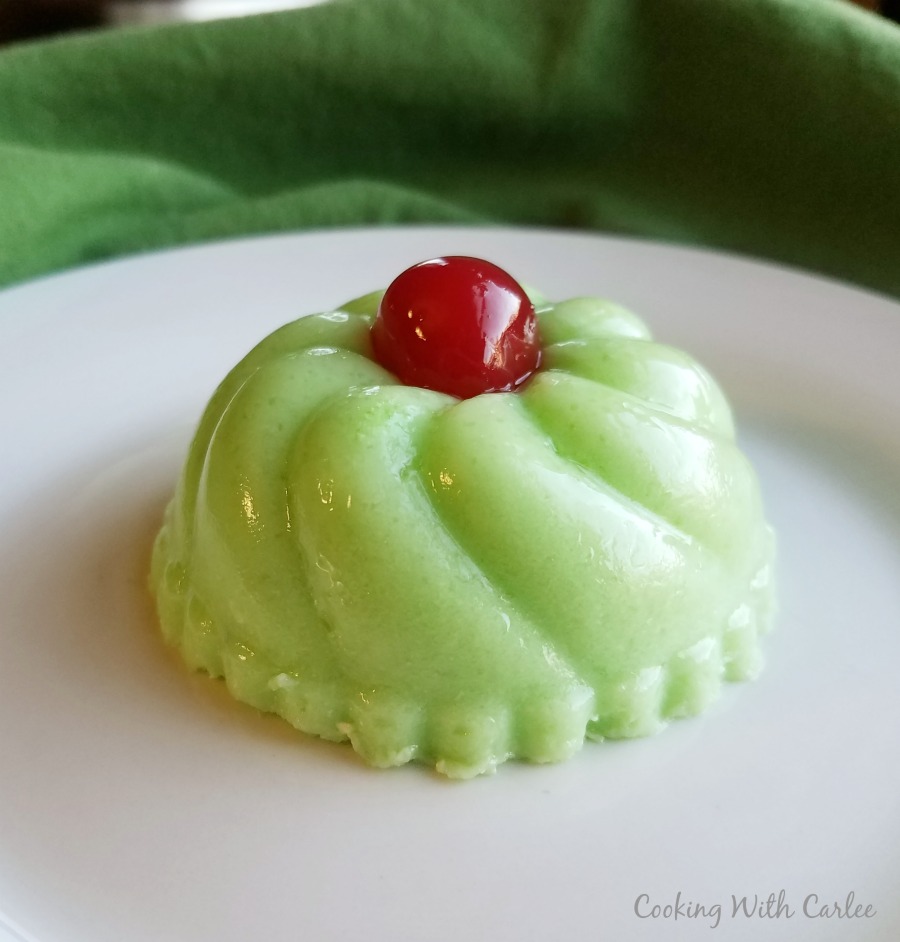 I would think you could bake it the same. The bake time is needed to set the filling. A graham cracker crust would be so good. Please let me know how it goes!

I've never heard of using kiwi in a pie. Where have I been?? Pinning and sharing. Thanks for sharing at Totally Terrific Tuesday last week! I can't wait to see what you have lined up for this week.

I never had either, but I couldn't see a reason why it wouldn't work. I'm glad I tried it! See you Tuesday!

It never entered my mind to make pie with kiwi, but this sounds amazing! Thanks for sharing at the Homestead Blog Hop this week!

What a great idea, this pie looks delicious! Happy St. Patrick's Day and thanks so much for sharing with Full Plate Thursday! Miz Helen

Thank you! It is fun to do something a little different every once in a while. We really enjoyed it! Have a great week, see you Thursday!

What a great idea! My husband loves kiwi fruit so this would be a hit with him. Thanks for linking up at Mum-bo Monday!

My husband has already requested another one! Thanks for hosting!