If this sour cream and raisin pie tastes like something your grandma would make, it’s because she probably would! This pie is sweet, creamy and delicious with a pillow of fluffy meringue on top.

This old fashioned pie is creamy with a bit of tang from the addition of the sour cream. It is perfect for raisin lovers and people who aren’t huge fans alike. Each bite comes with a bit of delicious nostalgia.

Have you ever had a raisin pie? Beneath the layer of white meringue lies a filling made of sour cream and raisins.  It sounds kind of strange, but it is super delicious.

This vintage recipe tastes like a classic because it is.  Serve up a slice and your taste buds will be instantly transported to grandma’s kitchen.

I have been wanting to whip up one of these pies for quite some time.  My friend Val from Corn, Beans, Pigs and Kids makes a lot of pies and raisin is one of her favorites.

She has an updated sour cream and raisin pie recipe that looks delicious. Every time she mentions making it my mouth waters.

But it is a bit different than what I have in mind when I think of a raisin pie.  That is because the only time I’ve had a pie like that was at a diner that used to be in a small town just outside of ours.

My parents went there for lunch quite a bit.  I joined them once and my mom was raving about the raisin pie. It quickly became her favorite pie and she frequently went there just to get a slice.

It sounded like such an odd pie filling so I was intrigued.  Of course we had to order a slice.

That diner put a HUGE cloud of meringue on top of theirs.  Then there was the creamy sweet filling dotted with raisins.

You know what? It lived up to the hype!

I haven’t had a raisin pie since that day. But seeing it mentioned every so often makes me want more.

While Val’s pie looks delicious, it uses pudding mix and whipped topping to give a similar feeling.  I wanted the real deal meringue pie, so I made it old school style.

My husband was very curious what I was making when he saw the pre-baked pie crust.  When I told him it was a raisin pie he was dubious.

He had never heard of a raisin pie and apparently was picturing something more along the lines of a pecan pie but with raisins.  While it does seem like something like that would work, I think we were both glad that’s not what I had in mind!

You want to start by giving the pie crust a blind bake.  Make homemade flaky pie crust or buy a crust from the store, either works well.

Place the crust in a 9″ pie plate and crimp the edges.  Use a fork to poke some holes in the bottom of the crust.

Then line it with aluminum foil or parchment paper and fill it with pie weights or dry beans.  Bake it until it is lightly golden brown.  Set it aside to cool.

You will want to make sure you have everything out and ready when you get ready to fill the pie.  You want the filling to still be as warm as possible when you put the meringue on top.

The filling is loaded with an entire 16 ounce container of sour cream.  This is not a great place to try to save some calories and use low fat.

The full fat version is going to give you a much creamier and more delicious result.  Ideally your sour cream won’t have stabilizers or anything in it, you want real deal sour cream.

The filling ingredients are really simple and there are so few of them, you want to make sure they are good quality so they can sing. Make sure the filling mixture is bubbly and thick before you turn off the heat.

The flour and egg yolks should give the filling a nice custard-like consistency. It is the perfect thing to suspend the plump raisins and it almost has a citrus flavor without the addition of lemon juice.

Meringues always feel a little bit tricky.  There are so many things that can go wrong, but really they are pretty simple.

For the best results, you want the filling to be hot when you put the meringue on top.  So leave the warm sour cream filling in the saucepan on the stove until the meringue is ready to go.

Make sure your bowl and beaters are super clean.  Any tiny little bit of grease can affect how well the eggs whip.

On the same vein, even a tiny drop of yolk in the whites can ruin the meringue.  It is a good idea to separate the eggs over a separate small bowl.

Once you are sure the egg white doesn’t have any yolk in it, dump it in the bigger bowl.  That way if you accidentally break a yolk, you don’t have to start over if there are multiple whites in the big bowl already.

Start by beating the egg whites and a little cream of tarter until they are really frothy and foamy.  It doesn’t quite have to be soft peak stage, but you want it to be airy.

Then slowly add sugar while the beaters are going.  Add just a tablespoon at a time so that the sugar has a chance to fully incorporate and dissolve.

Once all of the sugar is added, turn the electric mixer up to high and let’er rip.  You want to beat it until it is glossy and holds stiff peaks.

It is possible to over whip the egg whites and make it grainy. So make sure to keep an eye on it and stop when it has a sheen and holds it shape well.  This should take about 3 minutes.

Putting the meringue over hot filling helps to cook it evenly as well as reduces the risk of the filling steaming and causing a layer of liquid between the filling and the meringue.  You also want to try to get the meringue all the way to the edges.

That way the meringue doesn’t shrink as it cooks and cools. You want to create a seal and give it something to hold on to.

Once the pie has been baked and the top of the meringue is a light brown, remove it from the oven and let it cool slowly.  That will help keep the meringue from weeping.

After the pie has been cooled to room temperature, transfer it to the refrigerator to make sure the filling is set.  After a couple of hours of chilling it is ready to serve!

If you don’t want to mess with making a meringue, you can make some whipped cream instead. That would be a really tasty way to top this easy custard pie as well.

The filling is super creamy.  It almost tastes like there is lemon in it from the sour of the sour cream.

The raisins are soft with a slight chew.  The meringue is like a fluffy marshmallow cloud on top!

It is super tasty, but on the rich side.  So err on the side of smaller slices.

The reactions of my family were pretty funny.  My dad instantly remembered it from the olden days and my mom was super excited.

My brother didn’t remember having raisin pie before and he called it an “old people pie” but didn’t have any issue eating his whole slice.

My husband who envisioned a pecan pie texture was pleasantly surprised with the creamy filling. He was pretty excited about the meringue on top too.

If you want more old fashioned desserts, try my baked peanut butter pie recipe. Or if you are in a cake mood try my great-grandma’s butter cake with fudge frosting.

Old fashioned fruit cocktail cake is another great option. It is a scratch made cake, but only takes a handful of pantry staples to make.

Or try a vintage poor man’s cake. The batter is made in a saucepan and it’s loaded with spice and raisins, it is easy to make and tastes like grandma’s kitchen.

Love this recipe? Give it a ⭐⭐⭐⭐⭐ review in the recipe card below!

Creamy apple butter pie is silky and delicious.  It has the texture of pumpkin pie, but with the flavor of apples and goodness of sweetened condensed milk instead! 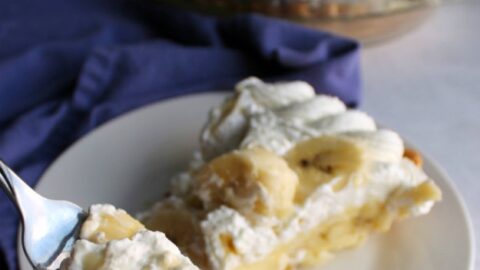 A flaky pie crust filled with bananas and homemade custard and topped with whipped cream. It is comfort food at it's finest! Banana cream pie is a must make dessert.

Enjoy this honey sweetened twist on a chess pie. With a kiss of lemon, honey richness and lots of chess pie goodness, it is a perfect treat for almost any occasion! 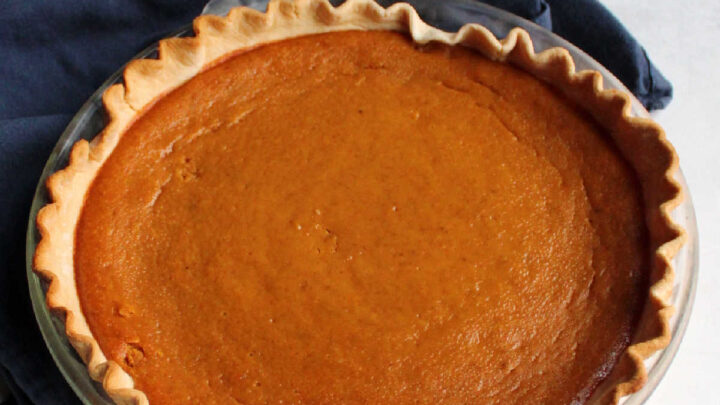 This simple pumpkin pie recipe is made with sweetened condensed milk, so you know it's going to be good! It only takes a few ingredients and tastes amazing.

This brings back many memories. My grandmother use to make this pie all of the time. It looks marvelous.

I have never seen or tried this before but it looks so incredibly delicious! I bet the flavors are fantastic! Have a great start to your week!