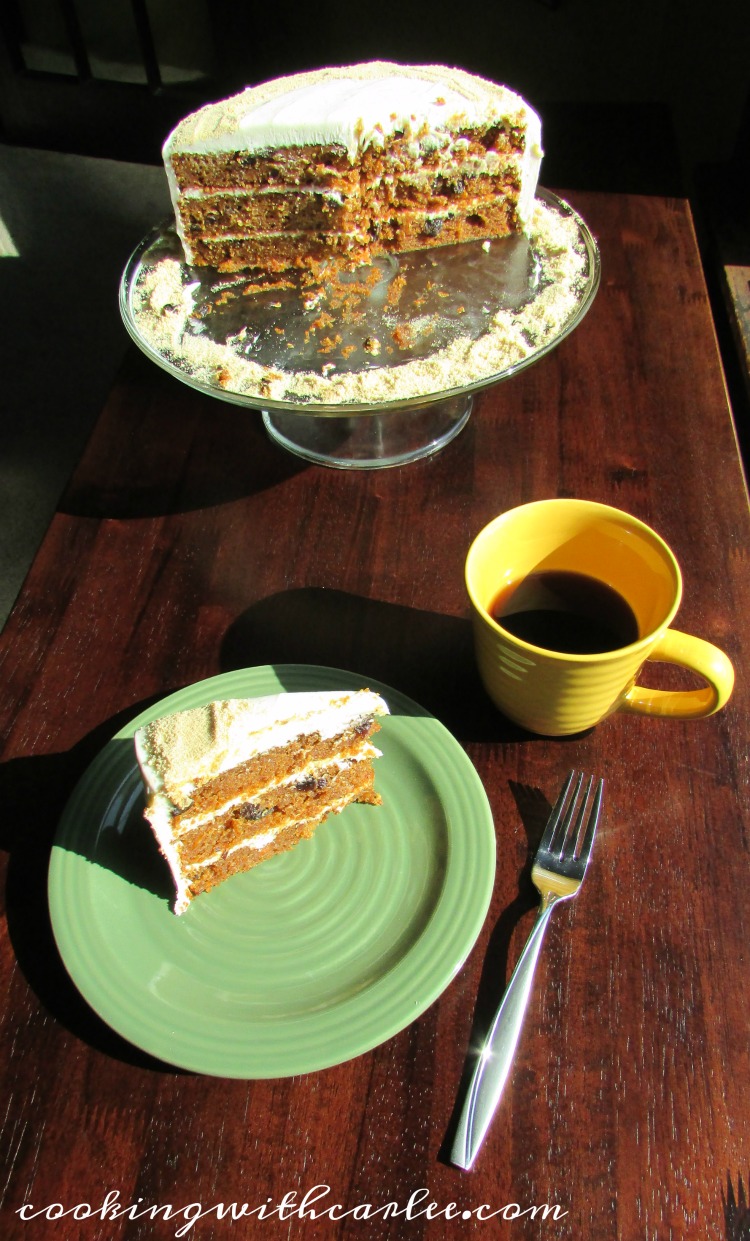 I figured I might as well start this post with a review from my grandma.  She said this cake was the best carrot cake she’s had and it almost made her purr.  Now that’s saying something!  Enough maybe even. Post finished.

Ha!  Of course I couldn’t let it just go at that.   This month’s bake kind of started with a bit of panic.  I thought I had the cake baked back in early July.  Something made me look again before I wrote the post and the cake I had baked was nowhere to be seen!  PANIC! I looked everywhere and I couldn’t find the list I had picked from.  What the heck happened?  It turns out Facebook on my computer is only showing me one event per group at a time. Who knows why?  When I looked on my phone I could see the list for SEPTEMBER and there was my cake. I guess I don’t know what month we’re in any more.  Ahem… I mean I am just really super duper prepared and ahead of the game!

There were some really great sounding cakes in the round up for this month’s Cake Slice choices.  One was really tempting, but had similar flavors to the cake I already baked for next month’s choice.  I wouldn’t want to wear you out with too many similar delicious cakes.  So I had to give this one a go. It was interesting anyway, there is a tablespoon of cocoa powder in it.  Yep, in a carrot cake.  It really isn’t enough to taste as chocolate, but I am sure it helps give that dark color and probably adds to the depth of flavor as well.  No matter what it’s purpose, this cake is delicious.

I honestly wasn’t 100% sure how this was going to go.  Maida’s ingredient list asked for 1 lb of carrots or 4 packed cups.  I was using bits and pieces of bags of carrots, so I opted to measure rather than weigh.  Probably a mistake.  It took a lot more carrots than it should have to make the 4 cups.  I would guess I used closer to a pound and a half.  It made for a more dense cake than it probably would have been otherwise.  But they baked well, turned out cleanly and ate like a dream.  I am sure I would have got more rise with fewer carrots, but I’m not sure I wouldn’t do it the same way next time.  I hope somebody else baked this cake so I can see how theirs turned out.

Maida offered instructions on making marzipan carrots from scratch.  It would have been really fun to try, but I didn’t have the time to go for it.  Nuts are always a pretty garnish, but then half of my guests wouldn’t have even given it a try.  The problem is the cake needed something!  So, I ground up a few graham cracker and sprinkled them on.  Next time I’d probably make a little more frosting and pipe it on instead, but as always I had a group coming over and more food to make so I went for quick and easy this time!

To make the cakes:

To make the frosting:
To assemble: 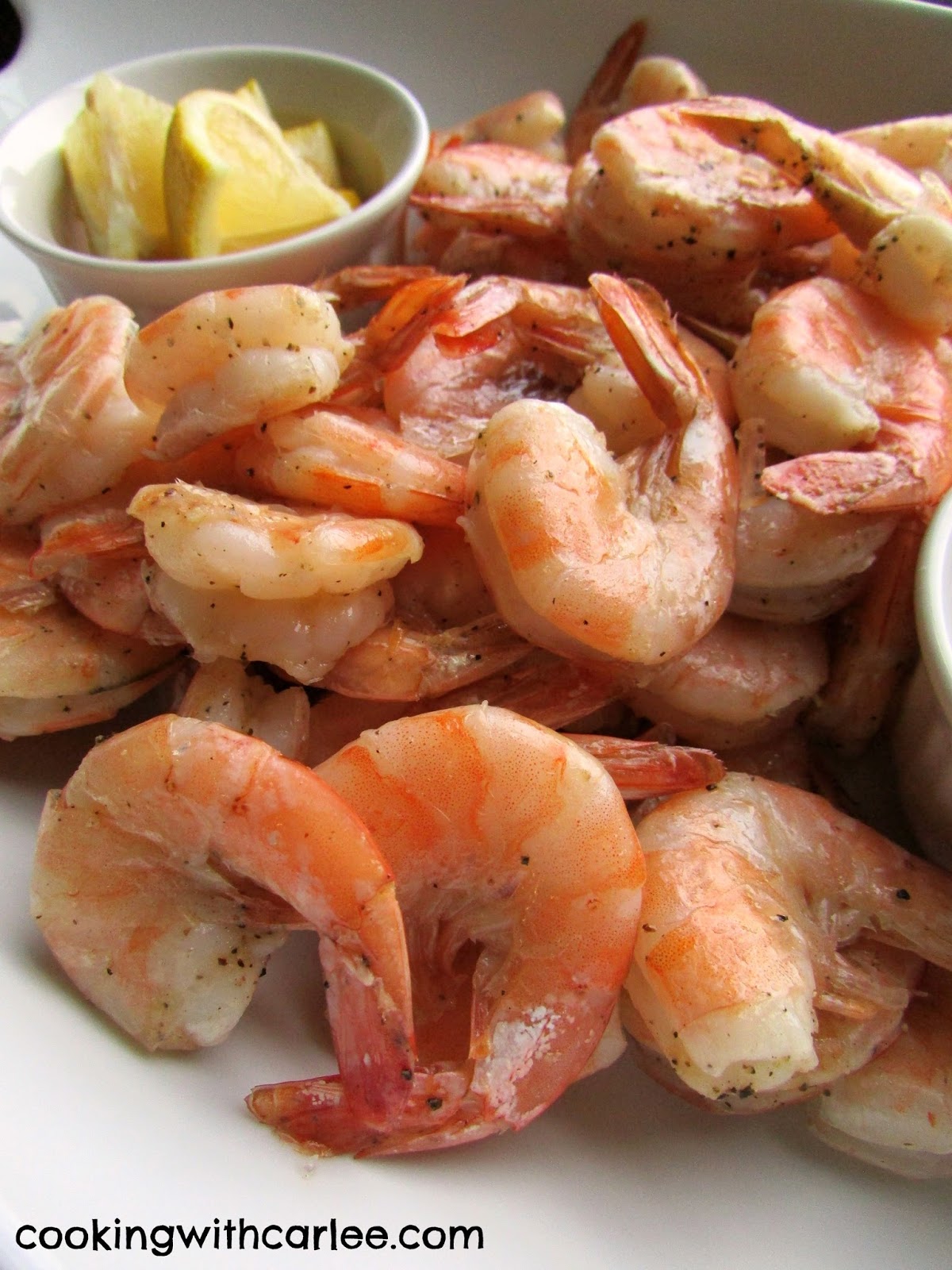 Trials and tribulations! I always thought it was a sign of a great cook when you can forge ahead and turn out something wonderful despite the issues!! This looks fantastic~and it looks like it frosted like a dream, too - some carrot cakes are so delicate they're all but falling apart when that frosting gets piled on.

It really worked out well. Plus I figure the extra carrots pushed it from the kind of healthy to the straight up health food category. So it was really a win all the way around! Thanks, Mollie!

What a beautiful Carrot Cake, I would love a slice right now. Thanks so much for sharing with Full Plate Thursday this week and come back soon! Miz Helen

Thank you, Miz Helen! It was a winner for sure. My grandma is still talking about it!

Carrot cake is one of my favorites. Absolute favorite. It is so moist and flavorful, dense and delicious! I've never made it from scratch though, this recipe looks really good and I'd love to see what the cocoa powder would do to the flavor. I've tried it in chili and it gives an earthy, deep taste, so I'm sure I would love it in carrot cake. The cream cheese icing is one of my favorites too. Delish. Pinning, Stumbling, Yumming so I can easily find this again!

It is fun to make from scratch, Nikki! I could see how a little chili would work in there. I may have to give that a try one of these days. Cream cheese frosting is one of my downfalls too. I think you and I could do some damage on a frosting buffet! Do you think they have such a thing? Maybe we need to create one! A bunch of frostings and a few dippers (or just a bunch of spoons!)

My Mom used to make a yummy carrot cake. One of us really needs to learn to make her recipe. My hubby loved it.Yours is so pretty! Now I want some too! What could be better than a cake party! Thanks for stopping by and sharing with us at Merry Monday. I’m all excited about fall and can’t wait to see all the fall food and projects at the new party starting tonight!

Hmmm, a fall party? I'll have to check that out! I love fall recipes! I am getting excited planning what to share this year and have quite a few fun things on the docket already. I hope you have your mom's recipe! I love trying new things, but there is nothing quite like the version you grew up on!

That bit of cocoa powder was fun, and since I had only used one cup of soft brown sugar instead of 1 cup each of brown and white... my carrot cake was a bit dark as a result. Still good though. Love love your triple layers!

I thought the cocoa was fun too, I always enjoy trying new things! Your cake looks lovely!